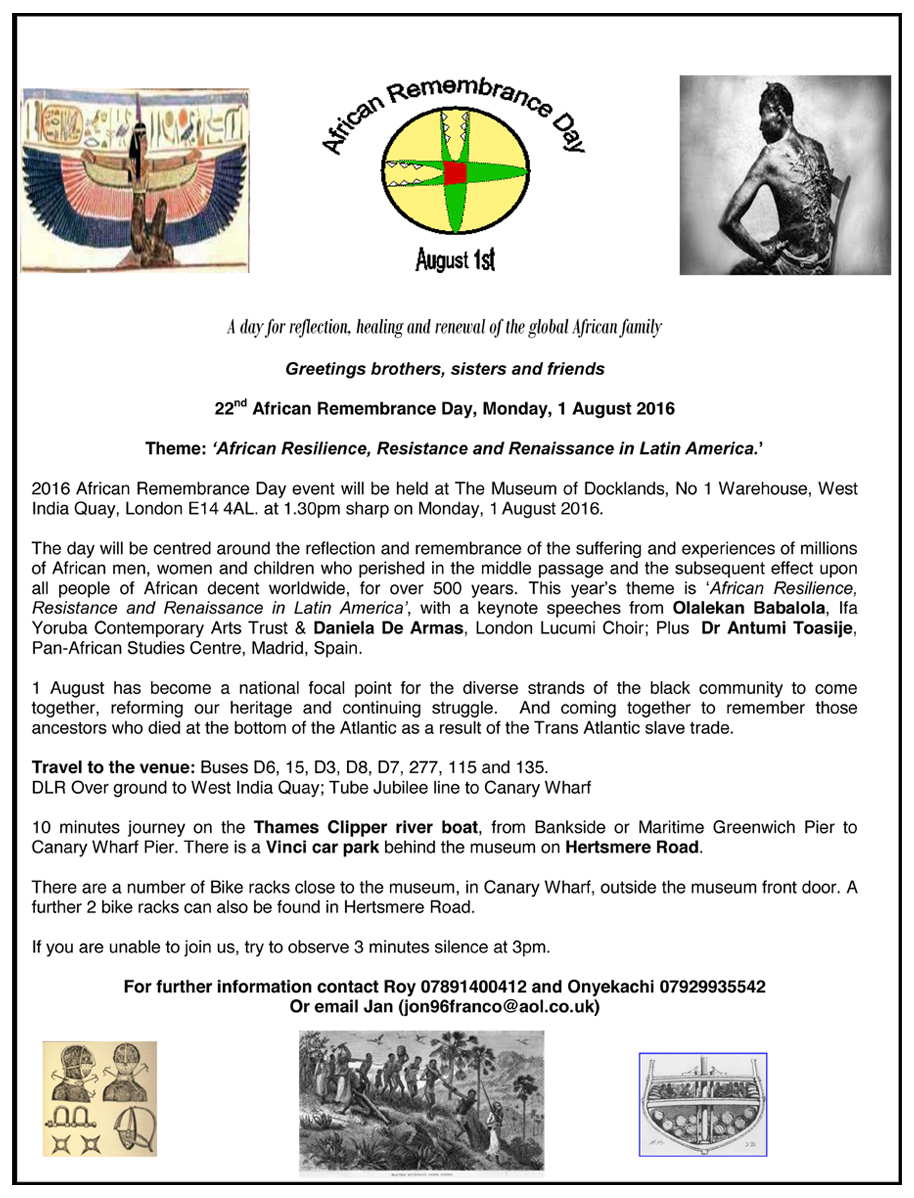 To coincide with the Rio Olympics African Remembrance Day (ARD) 2016 will focus on ‘African Resilience, Resistance and Renaissance in Latin America’.

As part of remembering the millions who died over the last 400 years, and understanding the ways that the legacies of slavery continue to shape the present, ARD 2016 will explore the journey of Africans in Latin America. It will seek to provide answers to some of the following questions: Which African communities went where in Latin America? What are their stories of survival and resistance against slavery and racism? Which popular heroes and heroines emerged during those struggles? What role have they played in the broader anti-colonial struggles against Spain and the United States? How have they transformed the region’s art, music and culture? What is their current status, and how do they view themselves as a global African community at a time the African Union contemplates the diaspora as a 6th Region of Africa, and the campaign for reparations gains a new momentum?

The day will continue to mark and highlight the importance of remembering the many victims of enslavement, as well as create a solemn space which can be replicated by African communities

The first African Remembrance Day took place at Dover on 1 August 1995, with UK politician and leader of the African Reparations Movement (ARM), Bernie Grant MP, as keynote speaker. Over a hundred people gathered to pay their respects and commemorate the millions of Africans who perished, unacknowledged, during the last 400 years as a result of enslavement. The day acted as a memorial ceremony for the individual women, men, brothers, sisters, daughters, sons, daughters, uncles, aunts, grandmothers and grandfathers, whose suffering was acknowledged with 3 minutes of silence at 3.00pm to reflect the 3 main theatres where their suffering unfolded: the Western hemisphere, the Middle and Far East, and on the continent itself.

Since then ARD has evolved organically, expanding on the notion of Remembrance, through seminars, talks, art exhibitions, music concerts, debates, and raising awareness of the global experiences and legacies of slavery amongst African descendants in the 3 theatres. ARD is not static and has taken place in different UK cities (Manchester, Bristol, Ilfracombe) where different political leaders have been engaged to build memorials and monuments for the victims of slavery alongside those of slave owners. As a result of the engagements both Bristol and Manchester, subsequently erected memorials.

Meanwhile, the focus on remembrance and slavery initiated over the last 25 years by the Organisation for African Unity (OAU), Bernie Grant’s ARM, and supported emotionally by ARD has helped put the issue of slavery and reparations firmly on the political agenda. Critically, on 11 March 2014 a meeting of Caricom Caribbean nations in St Vincent unanimously approved a ten-point plan proposed by the Caricom Reparations Commission to achieve reparatory justice for the victims of genocide, slavery, slave trading, and racial apartheid.

ARD continues to create a space for reflection, remembrance and rejuvenation from horrors of enslavement.

Prayers are presented from representatives of all the major religious pillars in our community. ARD is meant to be inclusive, to involve the African family in all its contradictions and diversity. The day is about an Act of Love, for those who have died, and using this love for them as a basis for bringing us together in our diversity.

Those not able to make the trip are encouraged, at 3pm, to stop what they are doing, where ever they are and join in the moment; one minute each for the victims in East, West and the African continent.

A short commitment not to allow a repetition of the horrors

Speeches will be made by distinguished guests on the theme of the meeting to improving understanding of the issue, and galvanise future action

Poetry is read, and drumming and acoustic music played and on occasion ritual drama is enacted in keeping with the spiritual and sacred feeling of the occasion. Artistic creativity has been an important aspect of the Remembrance Day. Art and creativity thus become an expression of life, not death. ARD celebrates the bonds we form, the communities we build communities through the process of shared symbols, shared language, shared culture, music and art.

• Sharing of food , drinks and networking